The first day saw 4 teams on each side competing in the Foursomes. The European Team came out strong and won three of the four matches taking a 3 to 1 lead in the overall match.

However, judging from the ‘after action discussions’ in the cafeteria at Sewell’s Point GC, the North American team seemed keen on copying the impressive come-back by the European team in ‘the other Ryder Cup’ in France back in September this year. No doubt, we were ‘teed up’ for some exciting golf for Sunday!

The second round consisted of 8 Singles matches. We had another exciting match on a gorgeous day with sun, blue skies and just a light breeze – perfect conditions for late-season golf.

The matches were very close with four of them decided on the 18th green, one match ending 2 up and three ending 1 up. It doesn’t get much more exciting than that. In the end the European Team and the North American Team both won four of Sunday’s matches which meant that the European Team won the 2018 ‘Ryder Cup’ 7 to 5! 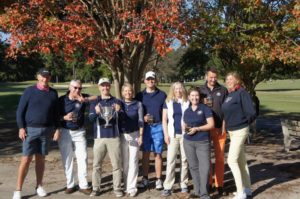 Congratulations to the European Team with the Win and with winning for the fourth year in a row – well done! 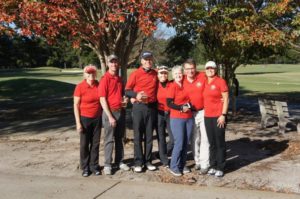 The North American Team in high spirits after a great day of golf! 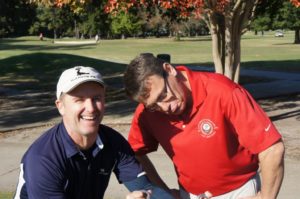 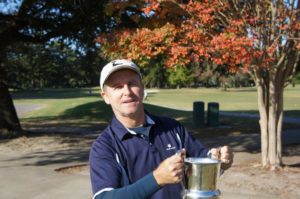 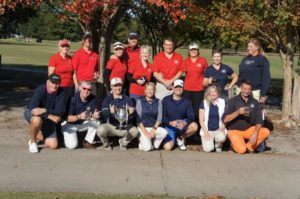 Everybody seems to enjoy the friendly match and the gorgeous weather. Missing from the photo are Gloria and Mark Tocher who played in Saturday’s Foursomes.

In addition to competing for the AGA ‘Ryder Cup’ there were prizes for ‘closest-to-pin’ on Sunday and thanks to a generous donation from Tom Dozier at Sewell’s Point GC we could also reward ‘second closest to pin’:

I’d like to thank all players for your sportsmanship, dedication and fighting spirit, and not least for supporting the AGA activities. A special and very warm thank you to the two Team Captains, Jon Millington and Nick Garland, for putting together and coaching two great teams and for making this event such an enjoyable one.